What Brick and Mortar is Up Against - an Example

I recently tried on a dress at a clothing store across the street from Joie de Vivre.  I loved the it, and wanted it, but they did not have it in my size.  I asked them to see if they could order me one, but they called me later to say they would be unable to get it until January - too late for my dress need!  I knew the name of the company as I had also bought one of its shirts, so when I was sitting home one afternoon, I googled it to see if I could find the dress.  I did, within seconds. Didn't order it though, wasn't sure what size I did need, if I really needed it, etc, and clicked out of their site and onto another -  - maybe the New York Times, maybe Facebook.  The instant the new site appeared - the instant - up popped an ad - for that very clothing company.  I had never seen one of their ads before.  And in the days since - that clothing company pops up almost everytime I am on a site that has any ads at all.  It's relentless.  But it really helps me understand why people order things off the web.  They might prefer to return to a brick and mortar store - in a perfect world - but maybe it's raining, or maybe their kid is sick, or maybe it's the holidays and they're just crazy crazy busy . . . and there it is - the item that they want, popping up everyplace.  What could be easier than just placing that order?  That is one of the reasons the customer who says they'll be back for something never comes.  And doesn't think - oh, Joie de Vivre could probably ship me that item.  Of course, maybe they just changed their mind; I'm not completely paranoid.  But seeing the web work its insidious magic was both fascinating and sobering!
Posted by Joie de Vivre at 8:15 AM No comments:

I am not speaking metaphysically today.  I can't speak out loud at all, which I discovered when I tried to answer the telephone at home this morning.  Nothing came out at all.  Then a couple of squeaks.  Then a very faint whisper.  (Happily my caller already knew I had a bad cold so she didn't hang up.)  Anyway, as I don't feel awful,
I headed to work, knowing I could spend most of the day in the back room where talking is strictly optional, i.e. mostly done at oneself.  But, my co-worker did have to eat lunch so I was on my own out front for a half hour or so.  And I realized - being able to casually say something to a customer is very important in retail !  I generally say hello when anyone comes in - couldn't really do that - and if I notice them looking at anything with puzzlement, I'll say something by way of explanation - or whatever - the demands of the job involve a lot of talking.  And it's very frustrating not to be able to just say something.  And talking on the phone is not really happening either - another constraint, as I often prefer to call people to ask questions - faster answers.  And, thus endeth my short treatise on the importance of the voice!
Posted by Joie de Vivre at 12:17 PM No comments:

I have a friend with a wonderful store in another New England city who occasionally makes amusing drawings of things his customers have said.  It's kind of a retail thing - I'm not sure anyone but another retailer would really "get" most of them - but, I often look them over when I need some diversion from the never ending email and paperwork that seems to swamp me every day.  Anyway, just looked at one - and, we were mentioned!! 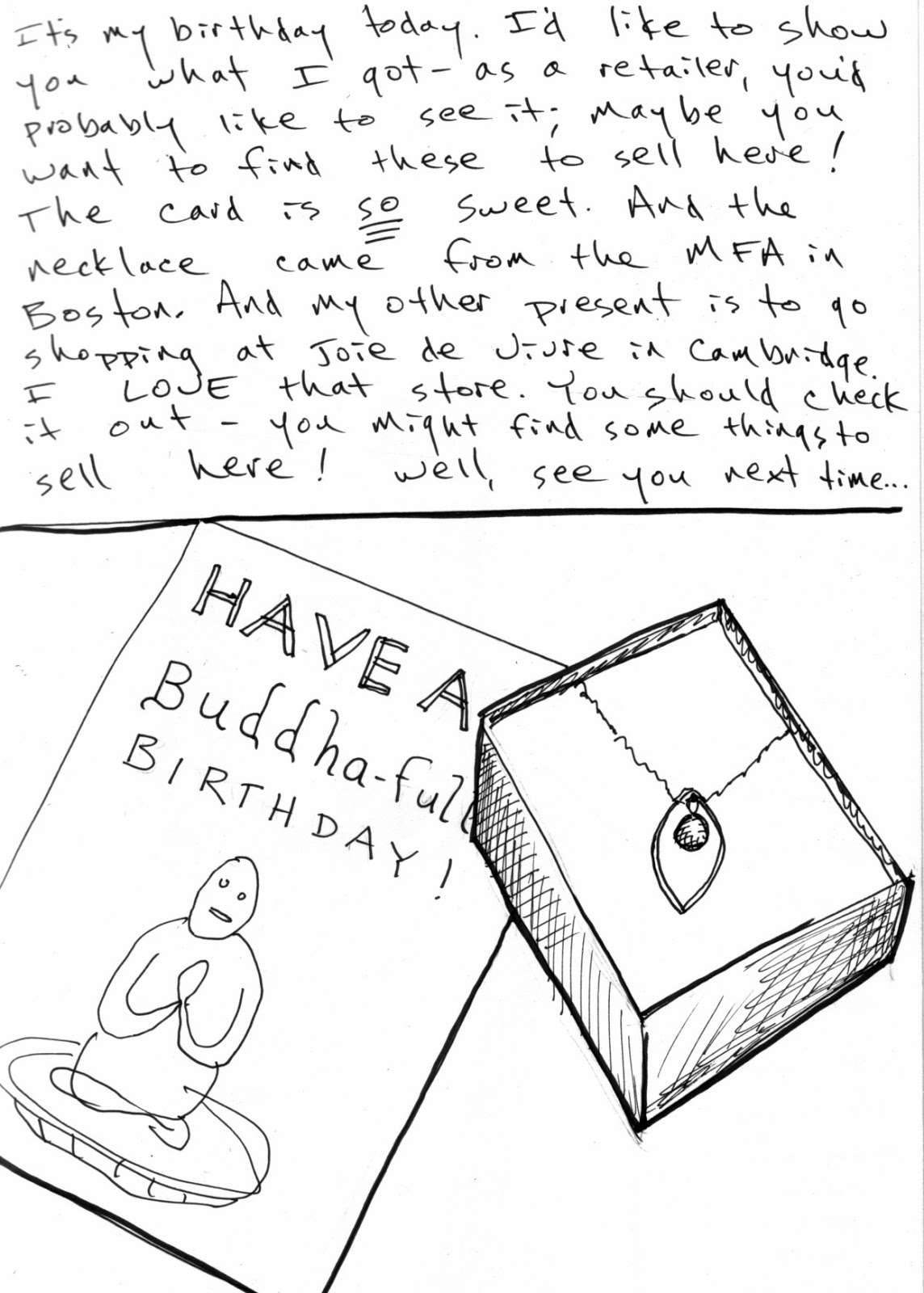 People do that in here too - show us wonderful items they got somewhere else - and I don't think it occurs to them that it can be a little annoying.  Of course, it's not always annoying - and often the item they are showing off is something I have seen and decided would not work here.  It can be annoying though, if there's other customers around and everyone suddenly gets interested in the non-available product!  Anyway, fun to see our name in lights as it were!  Thanks Matt - and for those who get to Providence - visit his store: it's wonderful!
Posted by Joie de Vivre at 8:38 AM No comments:

During the last few years of George W. Bush's presidency, we sold several items that, to put it nicely, "looked forward" to the end of his stay in the White House.  One was the incredibly popular Backwards Bush calendar, that counted down the days, hours, minutes and seconds to departure.  The other equally popular products - a series of items that featured the slogan "01.20.09" - Bush's Last Day.  We had bumper stickers, buttons, regular stickers, etc.  The man who ran the company was a somewhat hip older man, former New Yorker I believe, living in Vermont.  I don't recall exactly, but I think he was giving some percentage of his proceeds to good causes that were in trouble due to the cuts approved by Bush.  I saw him at the New York Gift Show this August, and he said, "do you have a minute?  I want to show you our new product."  I was taken aback when this new product turned out to be - stickers, buttons, mugs, etc printed with 01.09.17 - Obama's Last Day - and "just can't wait" on the promo literature.  He shrugged.  Have to make money somehow.  But a product like that without conviction behind it beyond that of cashing in on the next thing - no thanks. And I have taken a personal vow not to think much about the next presidential election until we are at least halfway through the current president's second term.
He also sells a series of Peace Magnets for cars.  I say - Peace, Love, Patience and Integrity.  Obama's far from perfect but how about the benefit of the doubt- at least until you start printing the President Christy merchandise.
Posted by Joie de Vivre at 6:18 AM 1 comment:

A friend sent me a link to a New York Times article about Bucky Balls this morning.  Readers of this blog and Joie customers will remember those from several years ago - sets of small, very powerful magnets that were wonderful to play with - but eventually deemed too dangerous by federal regulators for children under 14 (! dangerous if child - say 12, doesn't understand that one should not eat magnets) - and then, deemed too dangerous to exist at all. And to be fair, banning their sale was not totally without cause - there had been several deaths associated with very young children (2 -3 year olds) who had swallowed them.) But now - evidently they are going after the owner of the company that made them personally, even though the product was completely legal when he brought it to market and he complied with all labeling requirements.  (I remember being asked to personally sign a pledge that we would not sell them as a gift for a child.) And, he removed them from the market when forced to. So, that aspect of it is the focus of the article.  However, another thing that really struck me was what the legislation says about our strange and outright schizophrenic definition of children - Congress passes a law changing the definition of a child to anyone under 14 - but allows us to try 12 and 13 year olds as adults on murder charges.  You can't sell them magnetic toys but you can put them away for life.  Sounds like the twilight zone to me .. .. ..