A customer asked us to fix an earring for her so I pulled out our rarely used jewelry repair kit. It's a candy tin with some earring wires and backs in it. .. and a tattered piece of paper taped to the lid that made me smile. I recognize the hand of Sarah, a former employee and now good friend; she probably made it twenty years ago. Her spidery handwriting and her little drawings: a crying woman wearing a cowboy hat saying "oh no, my earring" and a smiling woman holding the kit saying "don't worry!" It makes me remember my visits to the store in New York that I worked in when I was in my twenties - the store that was part of my inspiration for starting this one. Some twenty years after I left they were still using signs I had calligraphed and it always gave me a start to recognize my own faded handwriting. Now it's happening here. Sometimes we'll unearth an old piece of stock and I'll recognize the writing of Deb, or Emily, Danielle, or Peter. Then I know the item has been around a little too long, yet I get to enjoy how it reminds me of the person who wrote it and their time here. We briefly tried a price gun here, many years ago. I hated the way the tags looked. And the thing about handwriting; no computer or price-gun generated tag would have the ability to evoke the past in the same way.
Posted by Joie de Vivre at 11:23 AM No comments:

The future is (almost) now

When I sent out an email to friends and customers about this blog, a former employee contacted me and asked me if I would like to use any of the numerous cartoons he drew about the store while working part time about fifteen years ago. This was very exciting as I love his work. I found this cartoon in my inbox this morning — the automated Joie de Vivre of the future. What was shocking: the date this futuristic cartoon was set in 2013. I remember seeing it for the first time, and the thought "that's not very far away" did not cross my mind. It crossed my mind this morning. When I emailed Crispin, he agreed. "I drew that in 1993," he said. "2013 seemed impossibly far off in the future." So... welcome to the future — we're getting close! 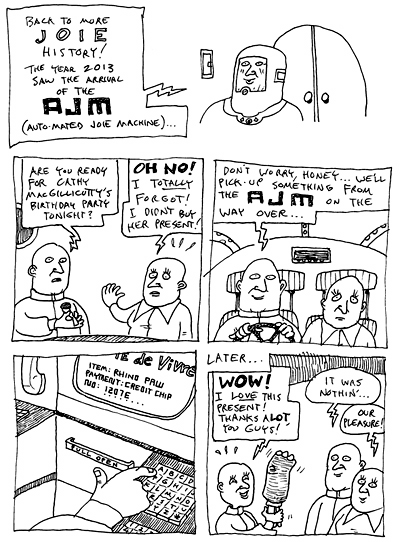 Posted by Joie de Vivre at 6:13 AM No comments:

It was a very hot and sunny pre-Memorial Day weekend Friday, 90 degrees in the shade. Our air conditioning, which has been working so well that we're often cold, suddenly decided to take a break. We had a crazy hour or two, giftwrapped 40 small wind up toys for a teacher, more gifts for someone else, and then - business died and no one came in. Between the heat and the lack of people, I was feeling a little out of sorts, and the last few who wandered in the door seemed to be feeling the same, picking things up,putting them down looking bored, or worse slightly unhappy (possibly my own paranoia there) arguing with their companions or completely unable to decide which color plastic slinky would really be perfect for a three year old boy. As is my habit in such circumstances, I was wondering what I was doing with my life; was it really worth going on with the store, when just before closing, a customer approached the desk with a few cards. "These are for my anniversary," he said. "I love your cards, I really think you have the best cards." We talked for a bit, and he told me it was his 20th anniversary, and that he had bought his first anniversary card at the store. This conversation completely changed my mood, and I ended the day with a refreshed spirit. It's amazing how just the smallest conversation can change one's mood. Thank you, Mr. Anniversary Man!
Posted by Joie de Vivre at 5:43 PM 1 comment:

I ordered some bath salts from one of our vendors. They are smartly packaged with bath or water related sayings, as in "A woman is like a teabag, you don't know her true strength til she gets in hot water." I chose five or six different quotes that I liked. Another was: "There might be quite a few things that a hot bath won't cure, but I don't know many of them." When these arrived at the store I saw each quote had its author listed beneath in small print. It was interesting to find that the teabag quote came from Eleanor Roosevelt. The second quote was by - Sylvia Plath. I just couldn't make sense of this. The first thing I think of when I think of Sylvia Plath is her struggle with depression and tragic death by her own hand. So the first thing I thought when I read the quote knowing it was hers was: well .. she definitely found something a hot bath couldn't cure. I couldn't bring myself to put her bath salts on display. Too incongruous and weird. I decided to call the company and explain my dilemma. "Has anyone else mentioned this to you?" I asked, after explaining my problem to a customer service person. Silence. "Uh, no, no one has mentioned it," she replied. "Who was Sylvia Plath, anyway?" I thought of the Bell Jar; the searing books of poetry. I tried to explain. "It's fine if you want to return them for credit,' she said. She had no idea what I was talking about. Return them I did. When it comes to inspiration about going on in tough times, I'll stick with Eleanor.
Posted by Joie de Vivre at 6:15 PM 3 comments:

A woman was in the other morning; she asked for my advice and quickly decided on two gifts. As I was wrapping them, her cell phone rang and she took the call. With only the counter separating us, she plunged into conversation, beginning with "I'm at the end of my rope!" and continuing on to complain about someone's behavior. She never looked at me, or acknowledged in any way that she was making me privy to a very personal conversation. Later that day, another shop owner from the neighborhood was in, and I told the story, stressing how completely invisible I'd felt. I've seen stores with no cellphone signs on their door. This seems a little harsh to me. Sometimes people want to confer with a friend or be accessible to their child or their client, new boyfriend, etc.. I just want them to go leave the store when they have long personal conversations, and if not, to apologize to me for having to listen to same. Anyway, my colleague agreed, and then told me about a quote he had read years ago that had stayed with him. “Be kind, for everyone you meet is fighting a great battle.” (Commonly attributed to Philo of Alexandria) I have no idea who Philo was. . but I like his advice.
Posted by Joie de Vivre at 6:33 PM 1 comment:

learn something every day

We sell two products that are frequently mistaken for each other and I'm becoming well practised in saying, "No, that's a boink not a finger trap; a boink does this" and letting it fly across the store. As a matter of fact, it happened just this afternoon. When I added, "we do have the finger traps as well" the customer told me "we call them by a different name in my country - we call them Indian wedding rings." I must have looked confused, so she added: "You put them on the finger, and then drag the bride or groom to the church." I asked where she was from, thinking Monsoon Wedding. .. but she said Columbia. Humbling - of course there is more than one kind of Indian. Despite that slight embarrassment, it was fun to find out that the "finger trap" goes by different names in different countries. .. anyone aware of any other versions??
Posted by Joie de Vivre at 7:01 PM 1 comment:

Time flies when you're working all the time; I'm barely keeping up with my goal of blogging more than once a week! Today was Mother's Day. .. (we did a lot of giftwrapping yesterday) . and today, there were a number of fathers and children in. It's fun to watch the littlest kids trying to pick out something for Mom.. and getting completely sidetracked by the things they want. Dads with varying degrees of patience explaining that no, Mom probably would not love the mechanical noisy penguin race as much as her kid does. And we had some really sweet older kids and teenagers buying a present for Mom. Even as I recognize that Mother's Day is a pretty manufactured Hallmarky kind of holiday, I still get a kick out of the kids shopping. It was a beautiful day and everyone seemed to be in a good mood. Many customers stayed in the store for over an hour, just poking around looking at things - that always makes me feel good! The flip side: when someone walks in, takes a look around and immediately walks out - sometimes I feel a little stab of inadequacy: Why don't they find it interesting? Objectively, I know there are many reasons why someone might walk out. I know we can't please everyone, or even please our regular customers every single time, but I do take it to heart.
Posted by Joie de Vivre at 5:48 PM 1 comment:

What do you do with a toy?

A mom and her young daughter were in the store today. I'd guess the daughter was maybe two or three years old. She picked up a mini slinky and carried it around, occasionally asking if she could have it. When they were ready to leave, this was still under debate, and the mother asked, in a slightly exasperated tone: "if I get this for you, what are you going to DO with it?" The daughter seemed slightly confused by this but with impeccable logic, quickly came up with her answer: "Play with it!" The slinky was purchased and out they went.
Posted by Joie de Vivre at 7:09 PM 2 comments: