I'm in the back unpacking today. We got a lot of large boxes - Christmas merchandise is starting to arrive. I just opened up a box large enough to hold - let's say, three large fluffy bed pillows. In other words, fairly large. Inside: a lot of paper, and one small box, the size of a - let's say, a good, thick, old fashioned telephone book. And that was it. And, inside that small interior box?Something delicate, easily broken, made of glass? Nope! One dozen fabric holiday headbands. I had to go out to the front of the store and deliver an impromptu "what not to do when packing boxes" speech, complete with visual aids - the boxes themselves. My question: Why would anyone pack something in this ridiculous way? Why?
Posted by Joie de Vivre at 2:31 PM 1 comment:

A customer whose daughter is studying in Thailand for a year told me she had wanted to send over something made here in the good old USA. What did she choose? Silly Putty. She said it was a huge success - with an art professor who had never seen it before. Her story made us remember just how cool silly putty is - the snapping, the bouncing, and most of all, the fun of pressing it into a newsprint image to make a copy, which can then be morphed the good old fashioned way - by pulling and stretching. Our customers tend to assume that everything inexpensive that we sell is made in China. Not silly putty. And by the way, not the original Slinky either. And another fun toy that we sell- boinks - are also made here - I just verified it with a phone call to the company in Indiana!
Posted by Joie de Vivre at 9:45 AM 1 comment:

Literally - How Can I Help You?

Monday morning puzzle. A man is asking for a "spinning kind of toy" that the bought here seven or eight years ago. No matter what I asked him, he could not remember anything specific about it. Just that he wants one. The only thing I have to go on is the word "spinning." I can't solve this puzzle !
Posted by Joie de Vivre at 1:04 PM No comments:

A Good Thing Coming To An End

Don't worry — it's not Joie de Vivre! But, it is a beloved product we've been selling for years. The story goes like this: one day I saw a picture of a fake coffee cup "spill" in New York Magazine. It looked very funny and it gave the address of the party store on the upper East Side of Manhattan where you could buy them. I called them, and wound up talking to Jeremy Sage, the man who made them. In a funny conversation, I found out that he grew up in Cambridge, just blocks from Joie de Vivre. And that he had played Jesus, in Jesus Christ Superstar, for several years on Broadway. And a few other things including yes, he would be willing to sell us some of his spills. We were his first customer, though within a year after the article was published, he was exhibiting his work at the New York Gift Show. So, yesterday — ten or fifteen years later — I faxed him an order, and later found a note stuck to my computer saying "call Jeremy — he has some news." I called. "I'm retiring," he told me. "In a couple of days." When I expressed shock and surprise, he said, "well, it was a spur of the moment decision." He said that a lot of his accounts have closed . . . and he's bored . . . and he doesn't really need the money. I tripled my order for ice-cream and coffee spills, but that's it. We do buy similar things from another company who jumped on the bandwagon after Jeremy's spills made such a splash, but — they are not quite as good. And they don't make the ice-cream cup spills. And you can't choose your coffee cups. Or personalize things. His was truly a small and accommodating business, and we are very sad to see him go! 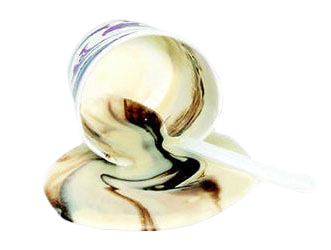 This morning I was leaning down to turn on some lights and I found a bubble clinging to the wall. It was fun to find an unexpected bubble. We sell these no-pop bubbles — they have just a little bit of plastic in them like the blaseball balloon "bubbles" of old you blew threw a straw — and they don't pop right away. We often demonstrate them to customers who haven't seen them . . . after they've been in the air for maybe 30 seconds, you can catch them on a fingertip. I knew the last time we had blown some was last Saturday ( the day a woman walked out of the store with a few unpopped bubbles in her hair) so the bubble I found this morning had been there for three days. Not a bad life span for a bubble!
Posted by Joie de Vivre at 8:35 AM No comments:

Another We Would Be Selling This If We Could 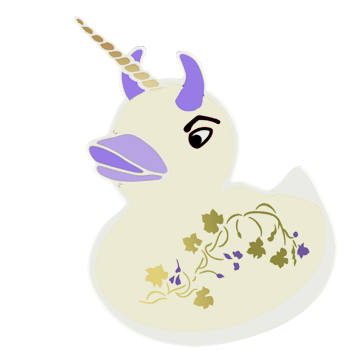 This time, the product doesn't exist except in our imagination. Joie employee Nancy, a BIG fan of devil ducks, designed this lovely version. We sent it to the company who makes devil ducks and amazingly, they have failed to jump on it. Okay, we know they're kind of at the end of the devil duck line, and that you have to make a new mold, and probably make hundreds of thousands of the little things... but we think they are missing out big time by not producing this product!
Posted by Joie de Vivre at 9:48 AM 1 comment:

It Really IS Pretty Good !

We have been selling Garrison Keiler's "Pretty Good Joke Book" for probably five years. Most of the jokes come from his once a year Prairie Home Companion Joke Show, and the book is popular as everything from a hospital present to a birthday gift to a just plain "here's something fun" gift. This Labor Day weekend, my sister and I drove to Albany to celebrate my mother's 86th birthday and I grabbed a copy of the joke book for the drive. It was fun to read them and they really made us laugh. Then, I read some at the birthday celebration and got my Mom laughing til she cried. She liked it so much I left it with her, so we didn't get to finish the last couple of chapters - but, we have more of them here at Joie. Now I understand why this book sells as well five years later as it did when we first bought it . . . it's really really funny ! (and, bonus - they update it every year or so with lots of new jokes- we're now up to edition 5.)
Posted by Joie de Vivre at 8:22 AM No comments:

The other day a long time customer was in shopping. I showed her a few new things and had left her to browse when I heard her exclaim excitedly over something. I looked up and the something was an item we have been carrying for maybe three or four years. She thought it was new because she had never noticed it before. This happens more than you might think. People who come in and look around often think they've seen it all - but they almost never have. And customers should not feel bad about this - a favorite story of mine involves a former part time Joie staffer who worked here for several years. He was famous for asking me "when did we get this?" about an item that had been on display in the same spot for at least a year! (If you're reading this Mr. "X" - you know who you are.) Anyway, I guess the moral of the story - if there is one - is - if you're looking for something here and don't think you see the right thing - it never hurts to ask - there might be a perfect thing that you just haven't spotted yet.
Posted by Joie de Vivre at 2:51 PM 1 comment: