A few years ago we became aware of another Joie de Vivre - I may have even blogged about it back in the early days of this blog. The odd thing about this other Joie was it's location - Cambridge, MD - just one letter away from Cambridge MA. Vendors occasionally mixed us up, and we also got the occasional call from a customer that confused both the caller and us - the "I saw this in your store and was wondering if you still have it" type of call that left us desperately trying to remember an item that we had actually never carried or seen. Anyway, I was visiting some friends in Easton, MD last week and realized that Cambridge MD was only ten miles away, so we decided to visit. They warned me that the town itself was pretty run down and deserted, and it was true - lots of empty storefronts and almost no people to be seen, though it was Presidents Day, so maybe they were all home baking Lincoln Logs. Anyway, we peered in the windows, (very different merchandise) and took some pictures, got back in the car and left. If I visit them again, I'll try to return. 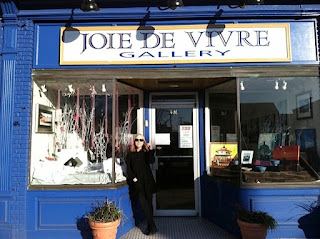 Posted by Joie de Vivre at 1:40 PM No comments:

Kind of A Shock !

Joie de Blog is in Philadelphia attending the Buyers Market of American Craft - a well respected craft wholesale only event that has been running for over 20 years. And of course we've enjoyed it thoroughly- time spent talking with old friends, finding new work from new exhibitors for the store, meeting new people - even if that excruciating traffic jam on the New Jersey Turnpike was kind of soul numbing, it's been a very good trip so far. The Buyers Market has been run for years by a woman named Wendy Rosen. I never got to know her beyond a hello, but she's been a constant on site presence so I was well aware of who she was. Last year, she decided to hand the organization over to her daughter so that she could run for the House of Representatives in Maryland. But she was here at this show and people were talking about her in a kind of hush-hush way. I finally asked someone what was up - it turned out she had been arrested this fall for voting twice - in two national elections - in 2006 and 2008. In Florida and Maryland. And was forced to drop out of the race last fall at the last minute, allowing a Republican win in MD. Call me naive - but the news boggled my mind. For one, because there seemed no choice between just plain unbelievably stupid - or on the other hand, mind bogglingly sleazy and arrogant. Not a good choice - and to be honest, it's hard for me to believe that a woman who put together the Buyers Market and ran it succcessfully for twenty years, then put together a viable run for public office is . . . stupid. Looking up the story on line I saw no apologies only rationalizations and denials and I really wonder how she can bear to appear in public. We human beings are curious creatures indeed!
Posted by Joie de Vivre at 6:32 AM No comments:

Back From Toy Fair 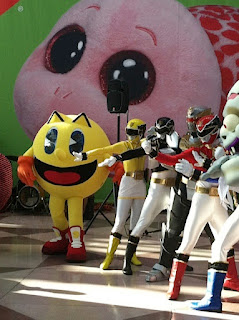 When reports of the big blizzard started dominating the airwaves, I began to wonder if I should, in fact, go to the Toy Fair. Visions of getting stuck en route, or stuck down there, and guilt at leaving everyone here to shovel out my house and Joie all played in my head, and I began to try to convince myself that I don't often find that much there, maybe I didn't need to go, etc, etc. But - just thinking back to last year I remembered several items that I wouldn't have seen if I hadn't attended, so I packed up my snowboots and left a day early. And it was well worthwhile! Besides getting to see things such as the dancing figures above, I got to play a giant Lego organ, pose with the world's largest plastic horse, listen to, and sing along with, an animatronic life size elk singing "New York, New York" and do lots of other fun things. And I found good things for Joie from the small - a wind up bunny with two new wind-up actions - to the large - a water wheel construction kit - to the techno/goofy - kitty ears you wear on your head that respond (evidently) to your brain waves! And, the train back only stopped three times and took two extra hours - once to replace the electric engine with a diesel, twice for no reason in particular that we passengers could tell . . . anyway, it was a good show, and I think our customers will be glad I went !
Posted by Joie de Vivre at 9:07 AM No comments:

The more it snows... 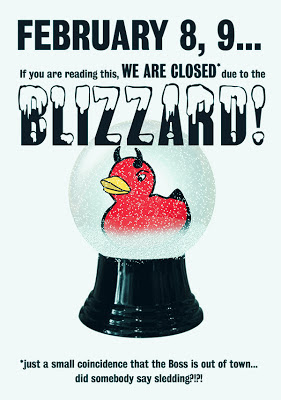 If you were really reading this, you would be standing outside in the snow storm, longingly looking through our front door...
[*Full disclosure: the boss is away at the New York International Toy Fair looking for new toys!]
Posted by Joie de Vivre at 12:19 PM No comments: 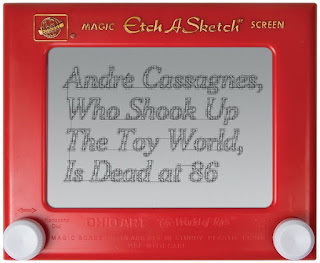 Over 100 million Etch-a-Sketches have been sold since they first came to market in 1960, and we are proud to say that some of them were sold at Joie de Vivre. We'll also boast a little - one of our former employees is an amazing Etch-A-Sketch artist - she can draw recognizable portraits and scenes at the drop of a hat, while some of us . . . the less said about our abilities the better! But even if you weren't that great at it, the Etch-a-Sketch was fun and compelling. And kids still love it, along with the Magic 8 Ball, Slinkies and other classic toys. Anyway, if you want to blow your mind just a little, google "Etch-a-Sketch artwork" - people have made some truly amazing things with those two little knobs. 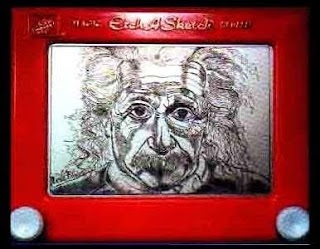 Posted by Joie de Vivre at 3:18 PM No comments: