What A Difference A Day Makes

and the difference is . . . we can stop and smell the flowers! By the time December 24th rolls around we are generally doing as much business in one day as we are in two whole weeks during the slow winter months . . . that will tire you out! It's crazy and fun and exhausting, and we run on chocolate and coffee - and it stops quite abruptly on December 26th. Of course people are still doing some last minute shopping, and there is the occasional return - it's definitely livelier than a snowy January day - but this morning an hour passed before a customer even walked in the door. We can chat with our customers, and do some gift wrapping again, and are back to our regular hours and staffing. People always ask if we go away on vacation after the season ends - and I tell them no - just resuming regular life feels like a genuine vacation!
Posted by Joie de Vivre at 12:58 PM No comments:

Hello faithful readers. the Joie de Blog scribe has been a little busy lately but we want to wish you all a very happy, relaxing and peaceful holiday. And to show you this - if you have three minutes just watch it - it is the essence of what we consider to be pure holiday magic. Turn up your sound and enjoy. And, thanks for all your business this year - and as Arnold has been known to say, "We'll be back"
Posted by Joie de Vivre at 10:18 AM No comments:

So much is happening every day right now, at the height of the holiday madness - that I feel I'm neglecting this blog and wanted to post a "I'm still here, just busy!" note. Last night was our annual Midnight Madness and I was at the store from 9 am to midnight . . . and back this morning at 9:30 am to clean up before working all day today. At my somewhat advanced age, I sometimes wonder how I manage to keep up every day - but there's a definite surge of positive energy that comes from seeing so many customers - many of whom I've know for years now - in such a short time - and there's also the fun of working with so many returning employees who help out at this crazy time - anyway, many blog worthy things are happening - but I'll just have to catch up after Christmas - though I do have a special treat to post later this week . . . stay tuned! (and "tuned" is more appropriate here than you know . . . . )
Posted by Joie de Vivre at 8:11 PM No comments:

My niece Talitha is traveling to Uganda to rehearse with a group of children - dancers - who will come back to the U.S. in January as the "Tour of Light." Very sadly they will not be performing in Boston, but you can read information about their tour here on her blog: Madame Future Moderator. Anyway, she will be in Uganda for Christmas, so I mailed her a little package of things she could use to celebrate the day while she was there, including a charming little reindeer puppet that we just got in from Poco-a-Poco. She sent me this little video featuring said reindeer performing a Christmas song at Heathrow in London. If you've never heard a reindeer sing - or are interested in my wonderful niece and her project - check it out. I sent this to the owner of the company we get the puppets from, and he loved it. So do I !
Posted by Joie de Vivre at 7:30 AM No comments:

Amazon goes completely to the dark side . . .

I know I just blogged, but this article I read in the New York Times today kind of blew my little shopkeeper's mind. I couldn't decide how to title this post - above, or "Will They Stop at Nothing?" Evidently the answer to that question is - "They will stop at nothing." Read this and judge for yourselves:

"Amazon’s effort to pay shoppers to scorn physical stores is prompting a bit of a backlash. The retailer is offering a bounty for those who venture to the mall or Main Street on Saturday and compare the price of items against Amazon’s price. Customers who use a special price check app on their smartphone will get up to $5 off on up to three qualifying products from Amazon in eligible categories (electronics, toys, sports, music and DVDs). This is not sitting well with physical retailers and their fans. There is a budding Occupy Amazon: Shop Local movement on Facebook. The American Independent Business Alliance said it was “jolting” to see the company “overtly encouraging people to spy on local stores while turning those businesses into showrooms for Amazon’s profit.” The alliance also noted that while Amazon said it was doing this to lower prices, the comparative data might also encourage it to raise prices on some items to a level just marginally below the physical stores’ prices. Oren Teicher, chief executive of the American Booksellers Association, wrote in an open letter to Amazon’s chief executive, Jeff Bezos, that this was “the latest in a series of steps to expand your market at the expense of cities and towns nationwide, stripping them of their unique character and the financial wherewithal to pay for essential needs llke schools, fire and police departments, and libraries.”

And it goes on, I won't include the entire piece - but I do agree with the ending quote: “Even if it doesn’t work fiscally, it sure is giving them a lot of free publicity. But on a more philosophical level, I just think it is mean.” I would say mean . . . and unethical . . . and greedy. They DO want to take over the world - watch out !
Posted by Joie de Vivre at 8:21 PM No comments:

When I opened Joie de Vivre, one of my aims was to have a store where there would be something for almost anyone to buy — whether they could spend just a little or a lot. I really really did not want to have a store where someone walking in with $5 would feel like there was nothing there for them to buy. And we have remained true to that aim - our price range varies tremendously. This year, I've been struck by how that is mirrored in our online sales. (We've had a website for about four years now — late to the party, but we finally got there — feeling we really did need an online presence — both for loyal customers who had moved away from our area, and just to keep up with the modern world and show off our goods.) We don't have a shopping cart, so people who want to purchase must email or call us. And we get orders — some large, but lots of small ones. Just yesterday we had two orders where the cost of shipping the item was higher than the cost of the item — a wind-up lobster, and a talking mustache. Our smallest order ever was for 5 tiny rubber chickens which I mailed in an envelope for 44 cents. But I love that people will just buy one little thing. That's one of the things I wanted to provide for people when I opened the store... and it's interesting to realize that our online store is serving the same purpose. (& below — Japanese erasers, incredibly cute and $1.50 each!)

Posted by Joie de Vivre at 6:50 PM No comments: 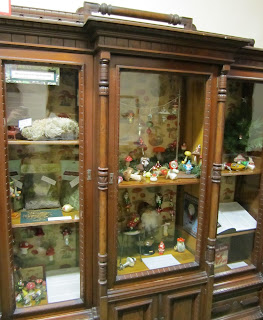 We recently found out that some of our mushroom related items have ended up in a display case at - none other than Harvard University.  One of the curators was in, and bought a selection of this year's stock of glass clip on mushroom Christmas ornaments.  A few days later she emailed me these photographs, saying she thought we might enjoy seeing where some of them were going - into the Decorative Cryptogram case at Harvard's botany Libraries/Herbaria !  She also mentioned that in some cultures, there is a belief that Santa's red and white suit is based on the Amanita musaria mushroom.  Who knew?  At any rate, it's kind of cool to think that some of our silly gnomes and mushrooms have ended up on display at Harvard. 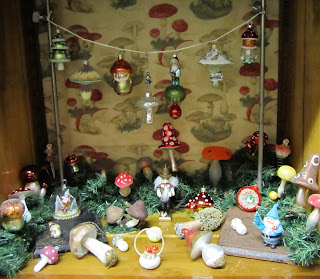