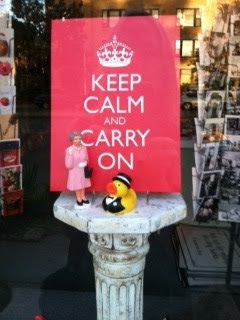 And before she really gets here tonight - come on in to Joie! We'll definitely be open all day Saturday. We're a little less sure about Sunday - it depends what happens weather wise - check back here or give us a call before coming out!
Posted by Joie de Vivre at 5:49 AM 2 comments:

A little girl, maybe three or four, was in Joie de Vivre with her mother tonight. They walked around the store looking at things and talking about them and this little girl had very definite opinions on most of the things she saw. She didn't like them. She definitely did not like any of the singing animals that many kids her age find fascinating. She put her hands over her ears and said "I hate that." Eventually I realized they were looking for a present for the little girl to give to an older woman - her grandmother? They looked at the Aqua pets - cute little Japanese toys and these got the same reaction: "I hate that." They continued through the store and I hear the phrase "I hate it" several more times, realizing I had never in 27 years heard anyone say it that often. I caught Mom's eye. "Guess she's going through a phase?" I asked as quietly as I could so the little girl would not hear me. Mom nodded. "Oh yes, this is a new thing." The daughter was temporarily distracted by a spinning tin toy - she actually liked it and it was briefly considered as the gift. "You could play with it when you visit her," Mom suggested helpfully. It was finally rejected, but without the usual condemnation. They wandered back to the singing animals, and the daughter noticed that the singing birthday bear was wearing a birthday cake hat that lit up. She became a little intrigued. "I think she might like this," she said to her surprised Mom. "I think she'd like that too, but it sings," said Mom, who though extremely nice and patient, was beginning to show signs of wanting to get this over and done. More discussion followed, and - to my surprise, little "I hate it" girl agreed to the bear - "if we don't make it sing." Into the bag it went, and out they went. I hope it's a long time before we hear another customer say "I hate it" that much again!
Posted by Joie de Vivre at 6:47 PM 1 comment:

Glad I Didn't Throw That Out!

We spent a lot of Saturday standing at the counter, looking anxiously into our credit card machine. Instead of the usual "Processing" message that pops up on its little screen, we were seeing "Please Wait." So we waited. And waited. Usually a credit card transaction takes all of 30 seconds but a minute or two would go by. And another minute. Then - joy - the paper would start to scroll out - but then - X%$#@!! - the paper would read TRANSACTION FAILED PLEASE TRY AGAIN. So, obedient servants of technology that we are, we tried again. Often it took two or three tries to get the sale though. And believe me, most customers do not like to wait ten minutes to complete a $10 sale. Or a $2 or even a $200 sale. I don't blame them. At the end of the day I finally got through the service desk who suggested it might be a telephone issue - now the phone company will come to investigate on Monday. And today I will haul out our extremely antiquated charge machine - the kind where the card is imprinted by the heavy moving swipe bar. Just in case. I look at that old war horse occasionally and think, I should probably throw that out. So, thank you, instinct that keeps me from actually doing it.
Posted by Joie de Vivre at 5:54 AM No comments: 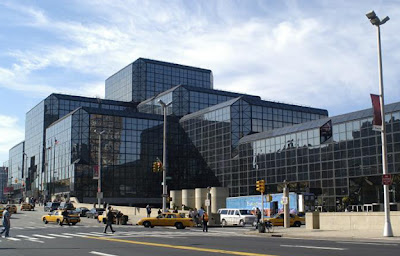 This rather Darth Vaderesque structure is the Jacob Javitz Convention Center. Within its hallowed (& leaky) halls, I found many things that will soon make their way to Joie de Vivre. Jellyfish ornaments, crayon rings, a cheezdoodle wallet, ballerina birthday candles, Japanese washcloths, scrabble coasters and mugs, and a silver rocketship usb port - to name just a few. I love getting to visit and talk with the people we do business with - exchange ideas, discuss the state of the economy, catch up on life, and I love finding new items for Joie de Vivre, and maybe best of all, I always leave feeling energized and excited to come back home and share all the new stuff with our customers. See you soon!
Posted by Joie de Vivre at 7:10 AM 1 comment:

So .. . here I am, in New York City, with my alarm set for 7 am - ready to go to the New York Gift Show in the morning. For me, the show is very similar to how customers feel about Joie de Vivre. They don't come into the store - at least the first time - expecting to find say - a yodeling pickle, or a singing goat - or the mind altering goldfish. That is exactly the way I feel before going to the Gift Show. I'm not expecting to find anything in particular - I'm just hoping to find those things that will make me think - wow, that yodeling pickle - or meowing cat clock - or book of awkward family photos - is exactly the right thing for Joie de Vivre. I have no idea what I will find . .. . but after all these years - I feel confident that I will find at least a few wonderful somethings. And then we will have the pleasure of introducing those things to our customers. Stay tuned . . . .
Posted by Joie de Vivre at 9:00 PM 1 comment:

There's a little game we get to play a lot more in the summer here at Joie de Vivre. It's called "guess what language those customers are speaking." We certainly have foreign customers during the year - but in the summer we really have lots. Just in the last few days, I heard Norwegian, Swedish, and Korean. Spanish and French are so common that they barely register as a foreign language - and they are the only two that I can actually carry on a (simple) conversation in. Once, we had an older Chinese woman shopping who spoke not one word of English beyond hello. She picked up a snowglobe and was trying to ask us a question. We would each speak in turn but there was no "aha" moment at all and it's weirdly frustrating for both parties when there is not a bit of shared language. Drawing pictures was the key in that case - and I guess today we could attempt to translate via Google. Anyway, I enjoy listening, trying to guess, and then asking. Israeli always takes me by surprise - I often think it's some kind of Slavic. Anyway, we plan to enjoy all our out of town guests for the next few weeks, until the end of summer brings back our regular customers!
Posted by Joie de Vivre at 12:13 PM No comments: 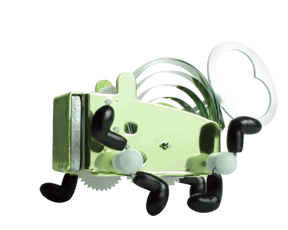 I just received the Joie August enews... a horrible oversight has been made by the Joie Scribe... maybe her mind is still on vacation... awesome! I love vacations... we used to fly over to Hells Canyon every summer and once my little sister... whoops! — I digress... missing from the newsletter is the best new thing to come along in a while (imho)... PEA! A tiny dynamo after my own heart... nothing can stop him... if he can't climb over it, he'll roll over and go off in a new direction. I haven't had this much fun at Joie since, well... hmmm — I do love that machine that tells me I'm awesome all the time... but Pea is awesome too!
—DD

Editor's Note: Pea is the newest windup critter by Chico Bicalho
Posted by Joie de Vivre at 4:17 AM No comments: