Just a short post to say we just received an email from one of our smaller vendors.  It said "I'm organzing my twitter campaign for May and am planning to tweet on May 27th about (item we carry.)"   She wrote because they are planning to link the item to our website -  which is very nice of them, and free publicity is always fine with us.  But - twitter "campaign"?  Mapped out a month in advance?  Maybe it's silly of us, but we always thought Twitter was supposed to be one of the more spontaneous of the social media platforms.  (I know - so old school). Guess that kind of creative and fun randomness doesn't last long - but just wanted to register our small pang of disappointment - it makes Twitter seem like everything else, just another tool in the marketing kit.  Which brings us to the thought - when it's so easy to constantly market market market through the internet - it can backfire and the result is few people pay attention.  I read recently that the number of ad clicks on websites has decreased by 40% in the last five years.  All interesting - and wonder where we are headed with all this . . .
Posted by Joie de Vivre at 6:49 AM No comments: 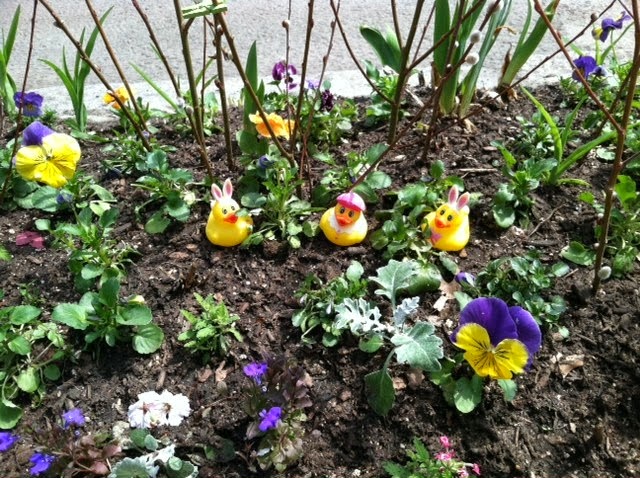 We decided to decorate our little front garden last weekend for Easter - adding some Easter ducks and some clip on chicks (on the pussy willow branches.)  We did it with a bit of trepidation, wondering if the little display would last.  It certainly wouldn't be a big loss financially if someone had taken these items - the total cost was well under $10 - but it would have been a spiritual loss of sorts.  (Okay, we will qualify that - a fairly minor one as spiritual losses go.)  Anyway, it made us very happy to come in every morning and see that our chicks and ducks were all in a row.  Except the ones on the pussy willows, which were not in a row, but present and accounted for.  Thank you honorable people of Cambridge!

Posted by Joie de Vivre at 9:04 AM No comments:

Return of the Prodigal Bun(ny) 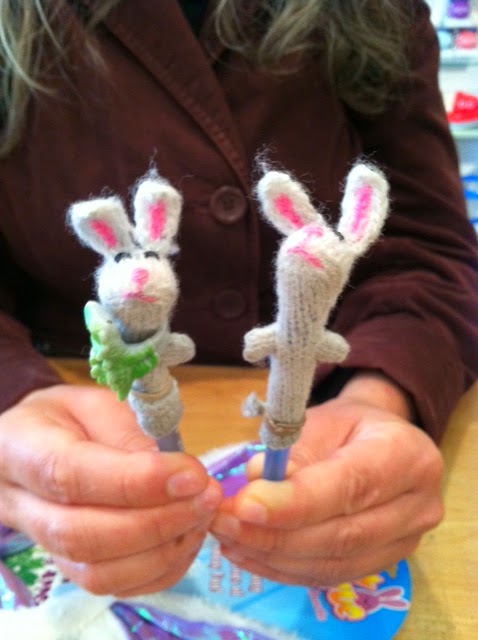 You see above a customer holding two bic pens with knit rabbit pen toppers.  The one with the small green dinosaur ring around its neck just returned to Joie de Vivre after a mysterious and up to now inexplicable disappearance. We get very attached to small things at Joie.  Previously, we used little devil duckie pen toppers; we were selling them, they were cute, and not incidentally, having pen toppers is an excellent way to keep one person in particular (okay - it's me) from chewing away the tops of all the pens - a bad habit I developed in my youth.  The little devil duck toppers were discontinued awhile ago and slowly all of ours disappeared.  As anyone with any life experience knows, pens do disappear, along with socks and keys and . .  anyway, we started out with three rabbits and one went missing long ago.  Just after Christmas this year we realized we were down to one.  After a week or two, we resigned ourselves to its loss.  Several months later, last Friday night, to be exact, I was invited to a Trivia night to benefit the Arlington Children's Theatre.  I would be sitting at a table with among others, four people who work very part time here during the crazy holiday season. (those among you with detective skills are doubtless saying aha!)  When we were paying our share for the table, one person took out her checkbook - and the pen on the left.  I snatched it out of her hand instantly.  She laughed.  "I've been meaning to bring this back for the longest time," she told me.  It may sound ridiculous, but when I texted this photo to the two current Joie de Vivre employees - I don't think it would be an exaggeration to say they were thrilled. (employees, correct me if I'm wrong.)  So, the lost bunny story has a happy ending, and we will try to keep a better eye on our pens, at least for awhile.
Posted by Joie de Vivre at 5:58 PM No comments:

Unclear on the Concept - or - We Love Packaging ! 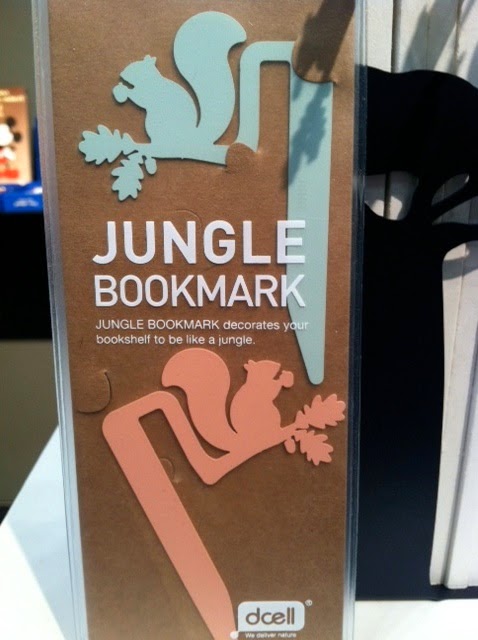 We are always on the hunt for squirrel items, as we love squirrels and so do many of our customers and while at the  Gift Show a few months ago, we were taken with these "jungle bookmarks."  Of course the juxtaposition of jungle and squirrel was quite the added plus as we are always on the hunt for the silly as well.  (the other two in the series were gorillas - okay - and hummingbirds - maybe remotely possible in a jungle.)  One of our witty customers suggested perhaps this was a sophisticated reference to the concrete jungle and we had to agree it made a kind of sense.  Today, I was sitting at my desk when I heard a muffled snort from the next room where someone was unpacking an order of very cute "wildlife" items.  Okay . . .  dogs can be kind of wild, especially when you're throwing them sticks or you let them off their leash, but I've always thought of them as really the epitome of the domesticated creature.  We hope we'll find more to add to the incongruous collection! 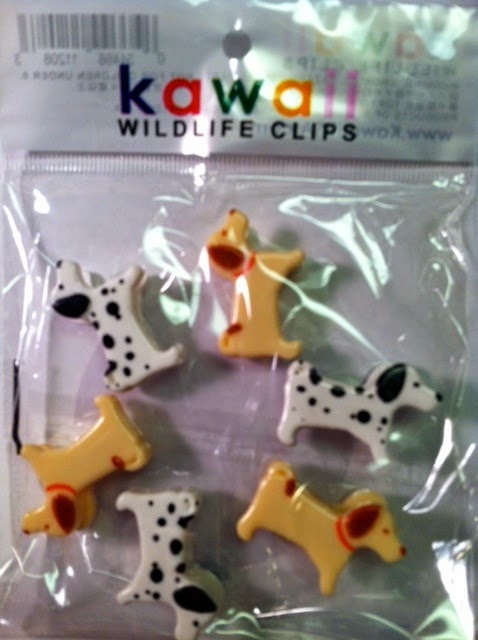