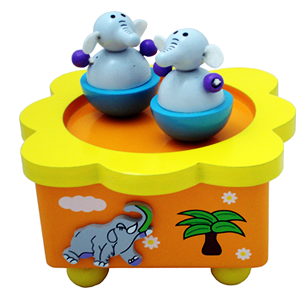 Years ago we bought music boxes imported from Japan from a company called TMC Designs. They are no longer being produced or we'd have them still as they were beautiful — sophisticated (i.e. non-cheesy) images of clowns and fairies and animals.  Sometimes the tune choices were — to put it kindly — a little odd.  When we asked about this the distributors explained that the Japanese makers didn't really relate to the song selection so were somewhat arbitrary about what went in what.  If the song was too odd they would be given a more appropriate song to replace it with.  For example — there was a box featuring a cute little grey rabbit that played "Hey Jude" — and evidently was a sought after item in San Francisco until the tune was changed to something more along the lines of "Here comes Peter Cottontail."  Anyway, we recently found a new music box company — a German company producing in China, and we got our first order today.  A set of ducks in a pond that played "Waltzing Matilda."  A circus monkey "The Entertainer."  Two little fish "It's a Small World."  All reasonable.  But wait — what's the music on the box with the two elephants?  Collector's alert!  It plays "Old MacDonald had a Farm" as the elephants madly spin around.  Pretty funny . . .
Posted by Joie de Vivre at 10:13 AM