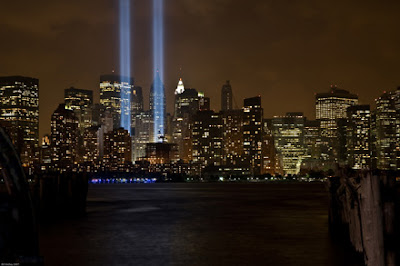 I was at the Jersey Shore on vacation. Didn't even know that the attacks had happened until late morning when I happened to glance at the television in our rented house. It was completely surreal being away from home, the stunningly beautiful day at the beach with only my two year old niece to bring us an illusion of normalcy as she of course had no idea what was going on. Though we couldn't get through on the phone to New York, we could reach Boston, and I told the two people working to close the store - it just seemed like the thing to do. Of course later would come our president's exhortations to defeat the terrorists by shopping - and people did - I think we had the best fall and holiday season we had ever had in 2001. I felt like we had a stronger than usual obligation to provide a little bit of lightness for our customers in those very difficult months. I hope we did.
Posted by Joie de Vivre at 1:42 PM