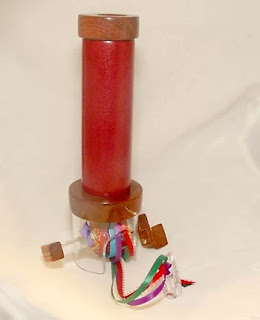 A kid and her Mom are browsing the store. They're pretty independent of each other, but when the kid sees something she likes she brings it over to show her Mom. It's clear she's been told she can probably have "one thing". Her item of choice seems to be the yodeling pickle which she brings over while it yodels. Mom doesn't seem too enthusiastic and on hearing the price - $16 - says its probably not going to happen. A bit later, the daughter picks up the ribbon kaleidoscope called "Slow Yo-Yo," made by the talented Tom and Carol Paretti. Its a wonderful object - one throws down three feet of ribbon which become the scope's object case. You look through as you slowly wind the ribbon back up. Our girl was enchanted. She wandered over to find her mother. "Mom, I don't think I want the pickle. I found something I really like a lot more." Just as her Mom is beginning to ask how much it costs, I interrupt. "I'm afraid I have bad news; it's worse than the pickle." I say it this way because I don't want to say the actual price - over $300. A moment of silence as the sad news is digested. "I guess it must cost $50, it's so awesome" says the daughter. She said it without resentment. She understood that it was clearly in a different league than the pickle. She brought her Mom to see it, unrolled it and rolled it up while Mom looked through and agreed it was indeed a wondrous thing. They stayed awhile longer while Mom picked out a card and small present. Then her daughter chose a pickle-pult - a toy that catapults miniature pickles - $6 - and they left.
Posted by Joie de Vivre at 1:23 PM